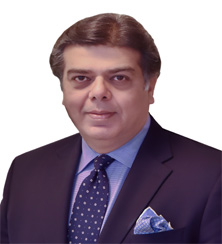 Sardar Ahmad Nawaz Sukhera is an officer of the Pakistan Administrative Service, who joined the Civil Service in 1985. Before joining as Cabinet Secretary on April 16, 2020, he has remained posted as Federal Secretary of Commerce and Textile, Information and Broadcasting, Board of Investment, and Privatization, since April 2014.

He earned his MPA degree from Harvard University (1994), MA (Development Economics) from Williams College (1993), BSc (Hons) degree in Economics, specializing in Industry & Trade, from the London School of Economics (1983). He had his schooling at the Aitchison College, Lahore. He was a fellow of the Centre for Development Economics at Williams College (1992-93) and Edward S. Mason fellow at the John F. Kennedy School of Government, Harvard University (1993-94). He is also an awardee of the World Bank Graduate Scholarship Program (1992-94).

He is a keen sportsman, playing cricket for, and captaining, Aitchison College, London School of Economics and University of London. Turning to Golf later on, he has played at the club level. He has served as an elected member of the Committee of Management of the Lahore Gymkhana Club, president of the Islamabad Golf Club, and is the current Administrator, Islamabad Club.

The Government of Pakistan recognized Mr. Sukhera’s services and conferred upon him the national award of “Hilal-e-Imtiaz”, in the field of public service, on 14th August, 2022.